Bollywood’s lover boy Ranbir Kapoor is one of the most sought after stars. He is a total sweetheart and a heartthrob of gazillions, who is happily enjoying the top slot in Bollywood thanks to his hereditary good looks, acting prowess, and hard work. Let’s take a look at some of the lesser known facts about the star, who will turn 32 on 28 th September.

1. He is named after his grandfather Raj Kapoor, whose real name was Ranbir. Raj is the middle name of all Kapoor brothers.

2. Like rest of the Kapoor Khandaan, even Ranbir Kapoor is a foodie. His favorites include crab at Mahesh Lunch Home, the Teesri (clams) and Bombay Duck at Gajalee. He also enjoys home cooked ‘bhindi’, ‘jungli mutton’ and ‘paya’. 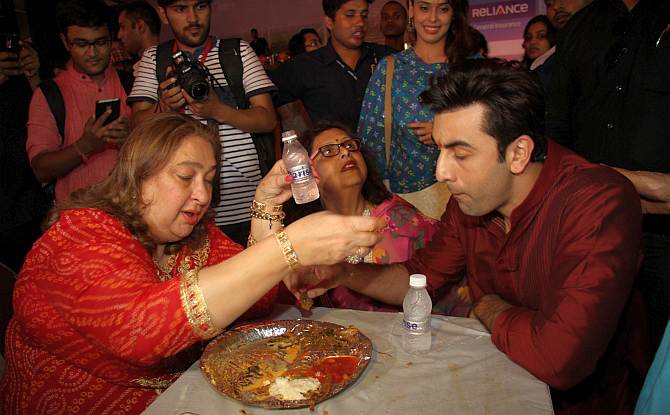 3. Ranbir is a big fan of dad Rishi Kapoor, and adores his movies, but not many know that the actor is too shy to see her mom Neetu Singh, onscreen.

4. Kapoor Khandaan has a history of having funny pet names like Chintu, Bebo, Lolo and so on, but Ranbir has no pet name—and he is thankful to his parents for the same.

5. Ranbir bonds well with his dad. However, this wasn’t always the case. As a kid, Ranbir was petrified of his father as he was very strict. The two never really got time to bond until Ranbir worked as an assistant director to Rishi Kapoor for his first directorial venture, ‘Aa Ab Laut Chalein’, and accompanied him to the United States for the shooting. 6. Ranbir Kapoor is a sensitive man, who isn’t ashamed of shedding a tear or two. Yes, he confessed in an interview that he cries often.

7. Ranbir’s colorful love life is not a secret. But do you know that actor Imran Khan’s wife Avantika Malik was this ‘Besharam’ boy’s teenage crush?!

8. According to a popular magazine, “He has an inch-long cut on his right cheek, sustained when he was rushing to the loo as a child and fell face-first on the pot”, and a “deviated septum which has him breathing from his mouth, making him talk and eat too fast”.

9. Style and class came naturally to Ranbir, but the interesting thing to note is that he buys his home slippers from Prada.

10. Last but not the least; Ranbir is a mama’s boy. Neetu Kapoor is on his speed dial and she even cuts his nails. Isn’t the mother-son bonding impressive?

11. Ranbir joined the film industry because he always wanted to endorse his favorite brand of cola.

12. The clumsy boy drank his father’s after shave by mistake and was rushed to the hospital to get his stomach pumped!

How many of these facts did you already know?

Jennifer Winget Agreed To Intimate Scenes For 'Beyhadh' On This Condition!