Bollywood superstar Shah Rukh Khan must be the most happiest person currently as his latest release Raees is rocking at the Box-Office. The film hit the theaters on January 25 and did commendable business till now. At latest, Bollywood Megastar Amitabh Bachchan has praised King Khan for his stellar performance in Raees. 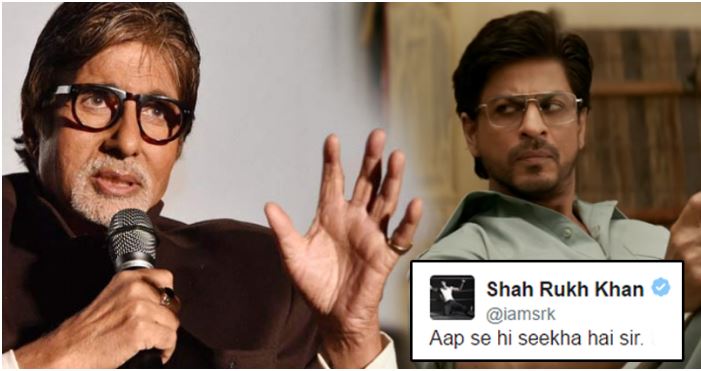 Also Read :-Karan Johar Congratulated SRK For Raees And This Is What Happened Next!

Raees is one of the roles which has a negative shade in it. It is a very different role what SRK use to portray in films. SRK, who mostly plays positive roles, essaying a negative role in this flick. He was a bootlegger who turned into a mafia don and killed by Nawazuddin Siddiqui in a police encounter. He hardly smiles in the movie and have an angry young man image.

His angry young man image has really made Big B happy, as he also played angry young man roles in the early 70’s. He took to twitter and congratulated SRK by saying, “Congratulations Shahrukh .. RAEES .. loved your anger in it !!”

Shah Rukh was happy to see the Big B tweet and replied by saying, “Aap se hi seekha hai sir (Learnt it from you sir).”

Here are few more tweets that will surely make you happy:

On the filmfront, Shah Rukh Khan starrer film is doing good business at the Box-Office. Till now the movie has raked up 59 crores in India. Dispite its clash with Hrithik Roshan’s Kaabil, SRK’s Raees still manage to lure a major chunk of audience.

Sir when playing drunk, angry,powerful, comic or swaggy the inspiration is always u.Actually for all emotions it’s u https://t.co/NoBR4NFuMF

The film was made on a budget of Rs 90 crores and will surely become a hit in its lifelong run. Directed by Rahul Dholakia fame, Raees also stars Pakistani beauty Mahira Khan and Nawazuddin Siddiqui.

Overall, its a major compliment for Shah Rukh Khan and he will surely be a happy person after being praised by Megastar himself.

What are your thoughts about this particular news? do let us know in the comments section below.