Facebook Twitter Tumblr Pinterest Messenger Messenger WhatsApp Telegram
In Bigg Boss 13, things change faster then the weather, contestant flip in seconds, we have been seeing Sidharth Shukla and Devoleena Bhattacharjee getting along with each other and one more thing was the highlight in yesterday episode where Mahira stops and hold Siddharth Shukla during the fight with Asim. This time we saw the wild card entrant Vishal Aditya Singh picking up a fight with Devoleena and made her cry.
Vishal was normal but when he got the title of Janani he started fighting in the house. We’ve got a video where Devoleena is seen blasting on Vishal for revealing her secret to Sidharth Shukla which didn’t go well with her who ended up crying in the house. 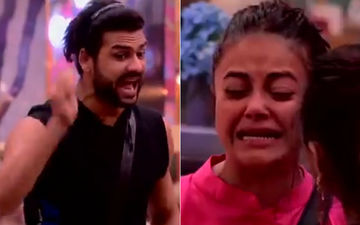 Here the enemies are getting close and friends turned enemies. Sidharth stepped out of his group and there is a three-group made now in the house.  In the video, Sid wants to clarify and asked Devoleena that she thought that Sid told Shefali Jariwala that by suggesting Hindustani Bhau’s name for captaincy, he will save Rashami Desai from nominations.
Read More: Ex- Bigg Boss Contestant Gives A Marriage Proposal To Devoleena Bhattacharjee, Says, ‘Love You Babe’
Devoleena said it was just an assumption. So when Sidharth clearly asked Devo who told this; Vishal jumps in their conversation and clearly said that it was Devoleena who told him about Sid’s strategy of saving Desai from nomination.
Tags
actor Actress Bigg Boss 13 Bollywqood Fights love Romance