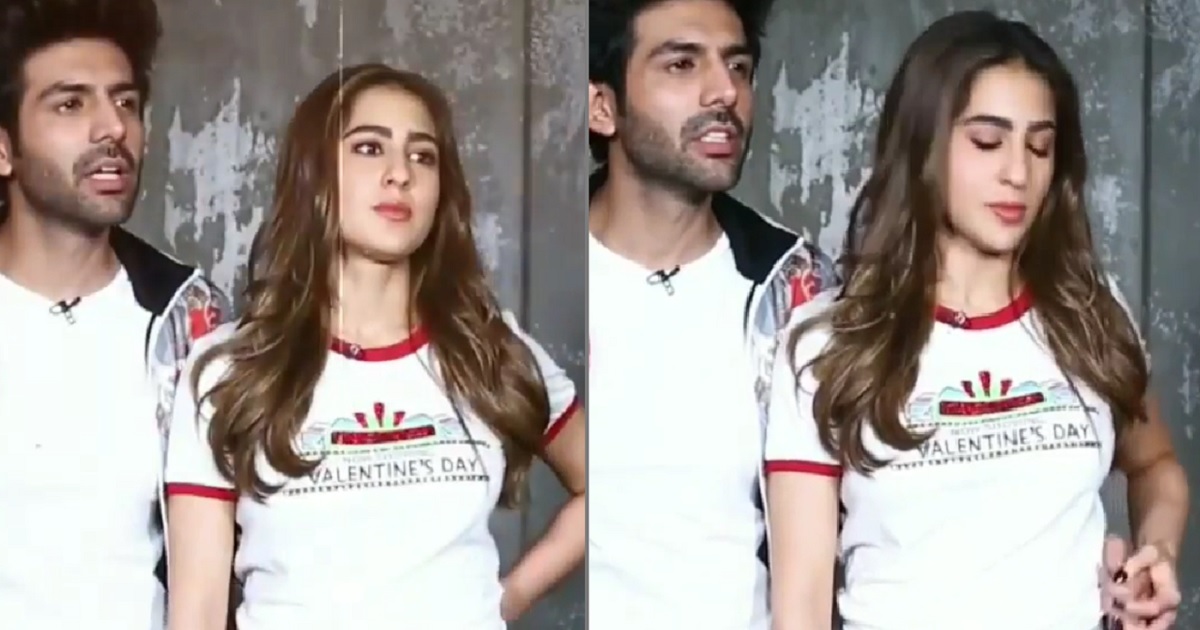 Sara
Sara Ali Khan and Kartik Aaryan’s chemistry is loved by the audience as they are busy promoting their upcoming film Love Aaj Kal and are entertaining us with their adorable PDA every day.  They were recently romancing a bit in Agra in front of the Taj Mahal.

We had also got you the video of Kartik and Sara from Ahmedabad, holding hands and the man saved his lady love from falling in water as she pranked with him. He changed the sides and held her throughout. But Sara didn’t stop teasing him.

Read More: Sana Khan Post Her Official Break Up With Melvin Louis, TV Celeb Reaction
Now, we have another sweet video of Sara and Kartik showcasing their love for each other.
In this viral video of #Sartik shared by their fan club, we see Sara sweetly getting her co-star to keep his palm on her waist. Kartik is busy conversing while Sara wants him to keep his hand on her waist and she makes sure he does it. So Romantic!

These moments of Kartik and Sara are really cute to share with your loved ones. Both are making our wait difficult for their movie Love Aaj Kal which makes it to the theatre tomorrow. Makers have smartly chosen Valentine’s Day as the release of the film.

Love Aaj Kal is directed by Imtiaz Ali and is said to be a sequel to Saif Ali Khan and Deepika Padukone’s film with the same title released in 2009. 11 years after the film released. In one of the interviews, Kartik was asked that Which style looks better on Sara, Sara in western or in Salwar Kameez?
Kartik with a smile revealed in white Kurta!
The chemistry is going to sizzle on screen and it is creating lots of curiosity among us. The film is going to hit the theatres tomorrow.