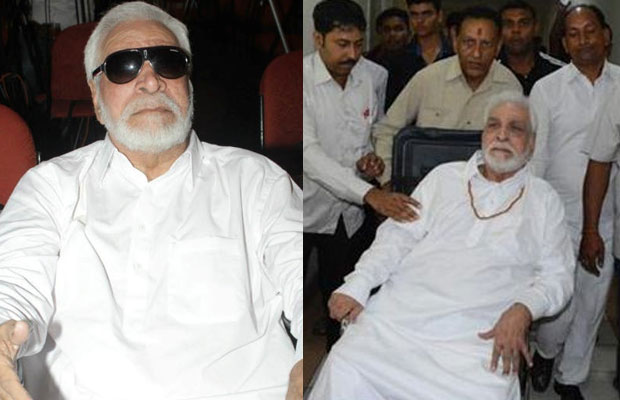 Kader Khan, who was keeping unwell for the past three years, is now on a wheelchair.

Shakti Kapoor, who partnered him in many films, is aware about Kader Khan’s condition.

According to the sources, Kader Khan had a knee surgery a few years ago which went wrong. And right from that day, he is suffering from bad health conditions. On this Shakti Kapoor had said to media that,

“Yes, Kader Khan is now on a wheelchair. It’s so so sad to be talking about this and I am trying to reach him since the past few days, but I am not able to get his number. I hope to have it in the next 2-3 days,”.

“Kader Khan’s elder son resides in Canada. So, he has gone there to avail medical facilities which can cure him. I think his wife is accompanying him.”

What exactly has happened, when asked? Replied Shakti:

“Kader Khan had a knee problem. He got operated but the operation went wrong.”

This only aggravated the 80-year-old Kader Khan’s condition and agony.

Sometime ago, Kader Khan had said that after his illness, producers and directors were unwilling to take him in their films. Kader Khan, who was present at the trailer launch of his film ‘Hogaya Dimaagh Ka Dahi’ in August 2015, was clearly having difficulty in talking and walking. Kader Khan was known for his work as a writer for several films with noted directors.

He had then told a section of the media,

“There has been a difference in the level of writing. As a writer, I feel that I should come back. I’ll try my best to bring the earlier zubaan back and people are definitely going to enjoy talking in that zubaan.”

Clearly, he was not happy with today’s film scripts.

Besides ‘Shakti’, Kader Khan was also a riot with Govinda. Their comic timing in the same frame was the talk-of-the-town then, and resulted in hits like Dulhe Raja, Sajan Chale Sasural, Dariya Dil, ‘Raja Babu’, ‘Aankhen’, ‘Coolie No 1’ and ‘Hero No 1’.

Well, we only wish that he will get well soon!