Â Ria (Ruhi Singh), teen daughter of the Indian Prime Minister absconds with a good-looking stranger Aryan (Krishna Chaturvedi) in South Africa to live her life freely. But he is trouble too. Can their ishq last forever?

The film revolves around the life of a young boy and girl who meet on the way and face certain unexpected kind of situations that trigger romance among the two. The girl belongs to a high profile family wherein her father is a Prime Minister of the state and is therefore surrounded by security for obvious reasons. Amidst all this, she finds this guy to get the freedom and enjoy her life unlike before. This simply follows the chase of the girl by the security as laid by her father and love blossoms that remains one sided from the girl, however, the boy is reluctant and doesn’t confesses the love for her. So, what happens next is interesting element to enjoy.

The film portrays itself a simple love story but appears to be a complex bizarre conditions thanks to the two different love stories collide each other, at one end you have a young couple on the other side, there is a divorced couple working on the other wise as a RAW agents to protect the girl and soon you find the roller coaster things replete with comedy and action.

Now talking about the star performances, Ruhi fits the bill of a sassy youngster, Krishna is relatively understated and believable. The lead actress have played herÂ part well enough, even though being in the learning stage in the industry. The bonding between the leads ( the newbie Krishna Chaturvedi and actress Ruhi Singh )Â is a must watch with a total of 33 lip locks in the movie, you can imagine the chemistry. Lisa Ray and Javed Jaffery were good to a great extent especially the latter. Seeing Javed in a serious role though may found indigestible to many yet looking at his performance that went competitive, you have enough reasons to give him all due respect to this actor.

The direction of this movieÂ has a number of hits and misses. The director failed to add the right spice in the entertainment value of the film.
What does work in the film’s favour is its old school take on romance and Nadeem Saifi’s melodious songs, reminiscent of his 90s hit music. Sung by Rahat Fateh Ali Khan, ‘Bilkul socha na’ stays with you much after you leave the theater.
The film’s screenplay is also not that appealing and similar is the story with the technical stuff like editing. However, the locations chosen by the director for the film along with photography seem to add glory to the film.

The film has two love stories colliding each other at a common point. The love story of the young coupleÂ and that ofÂ RAW agents who were separated but had to come together in rescue of this girl coming from a high profile family of the state. YouÂ will find love, romance, emotions, humour andÂ action coming together.

With two love stories going hand in hand and the ups and downs of the story, you are forced to stick to the movie till the end. 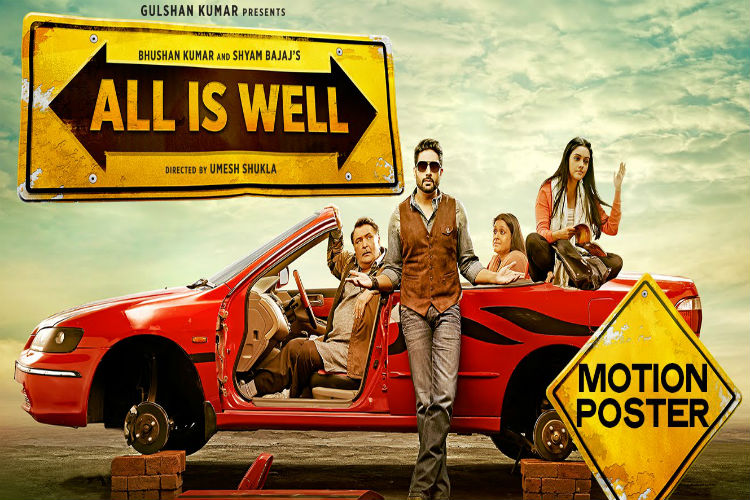 All Is Well Movie Review: This flick is ‘Not So Well’