Ace actor Manoj Bajpai and entertaining actor Pankaj Tripathi both appeared together on the famous TV show The Kapil Sharma Show. Pankaj Tripathi has always been open to the fans about his admiration in Bollywood and he is none other than Manoj Bajpayee. Both are popular for their excellence and natural acting in the films.

Manoj Bajpayee once arrived in a hotel where Pankaj Tripathi was working as a Kitchen supervisor and the Sacred Games actor was so in awe of Bajpayee, that he ended up keeping the slippers the actor had left behind.

Pankaj Tripathi recalled the whole incident and said on the show,  “I got a call that Manoj Ji is here. I used to do theatre back then so the kitchen staff knew it. I told them that whenever he orders anything from his room, I’ll be the one to take it. So I went there, met bhaiyya, said ‘Pranaam, even I am into theatre’, touched his feet and left the room. Next day he checked out. But he left a Hawai chappal behind. The housekeeping supervisor said ‘Are! Your Manoj Bhai is gone but he left his chappal here’. I said don’t submit it, give it to me.” 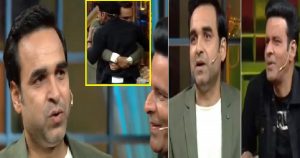 The time he shared this incident he was teary eyes and Kapil, Manoj Bajpayee and others stood in respect and gave a standing ovation. “ Why? If like Eklavya I too, could put my feet in his slipper).”