We have seen the remake version of the cult song of the 90’s ‘Ek Do Teen’. Jacqueline Fernandez is seen trying to do full justice to the song. She has got mixed reactions for the remake version. The recreated version is like giving a tribute to Madhuri Dixit. Since its release, the video has become quite viral on social media. 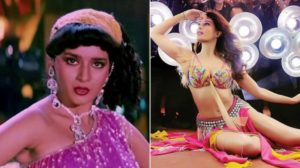 Now, get ready to see Kareena Kapoor Khan’s version of ‘Ek Do Teen’. One of Kareena’s fan club has edited a clip of her from the ‘Heroine’ song Halkat Jawani’ to the tunes of ‘Ek Do Teen’. The editing is so synced that for few seconds you will be thinking that Kareena has recreated the song. The lyrics, steps, expressions are very close to Madhuri’s version.

The recreated version has landed into trouble. N Chandra, the director of ‘Tezaab’ said that he was unaware of the recreated version and this news was given to him by choreographer Saroj Khan. He said, â€œShe (Saroj Khan) came to me and said, ‘Have you seen what they’re doing to our Ek Do Teen number?’ I had no clue. Saroj ji told me that the makers of Baaghi 2 were doing a new version of Ek Do Teen. She said she will take legal action against it.â€

Whom do you think has done justice to the dance number? Do let us know in the section below.

Kiernan Shipka in her Street Style at Los Angeles

Hrithik Roshan & Deepika Padukone are in Kabir Khan’s next project ?