Rosalie Bradford (1943 – 2006) holds the Guinness World Record for the most weight lost by a woman.1987, the longtime binge-eater weighed an astounding 1,199 lb, having spent 8 years i am mobile in bed. Following an intervention from friends and weight-loss guru Richard Simmons she started exercising as best she could (she could only clap her hands to Simmons’ videos at first) and amazingly eventually slimmed down to about 200 lb.

Sadly enough, in one of the five sessions of surgery to remove excess skin during her weight loss, she had some complications that later caused her death. She died on November 2006 at a hospital in Lakeland at the age 63. Rosalie Bradford posthumously continues to hold the world record for having lost the most weight. 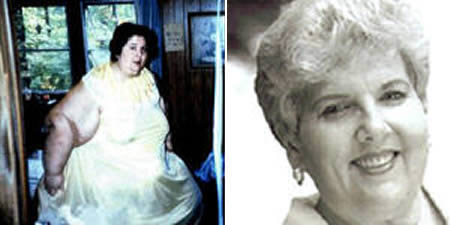 John Stone is an internet legend. This man fell into pattern familiar to many people: being reasonably athletic at some point and then gradually letting it all go,in 2003 he decided to make a few major changes, establishing fairly tough goal: to lose his beer-belly. So he went to gym. Five years later, it is difficult to recognize him. John Stone became bodybuilder and every month during the past 5 years he took pictures of him and put them on blog. See what desire and hard work can do.

Kabadiwala Are Now Available For Online Home Delivery Check It Out...