Former Bigg Boss contestant Gizele has once again raised the temperature with her sizzling pictures. She is currently in Greece holidaying with her friends. Gizele has no dearth of fans and she keeps her fans updated with her latest pictures. Her Instagram account is flooded with her pictures from Greece and we must say that her raunchy figure has raised the oomph factor once again. 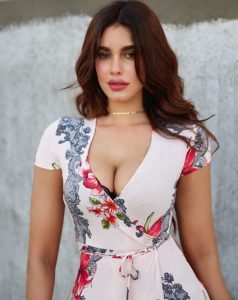 Here are the pictures:

She captioned the picture as: “Salt water cures everything …….🐬” 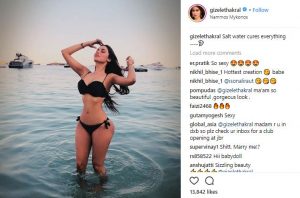 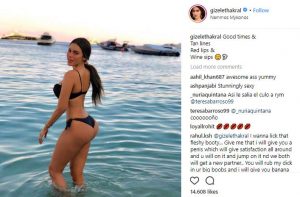 A few days back Gizele posted a picture sailing in a yacht she was travelling in. The moment she posted the picture it went viral. She captioned the pic as: “Sail away captain………………. ” 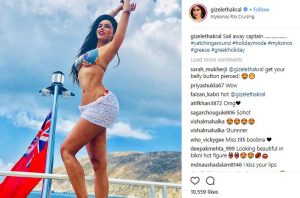 A few months back, Gizele recreated Mandakini’s famous shot from the movie “Ram Teri Ganga Maili”! In the photoshoot, she was flaunting her body in a white transparent sari with sensuous poses. Those pictures became viral and took the internet by storm. The photoshoot was done in Kerela. 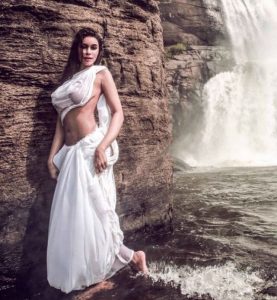 Gizele participated in Gladrags Model Hunt, where she was one of the top 5 finalists and bagged the titles of Miss Best Body and Miss Potential. She was also Kingfisher Calendar Model in 2011. She became a popular name after she participated in Bigg Boss 9.

Gizele has given holiday goals for those who are planning for a holiday this monsoon. What do you think about the latest pictures of Gizele? Do let us know in the section below.