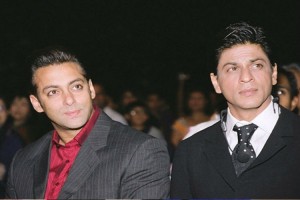 During a chat session with Twitterati, when a question about “what would he like to say @BeingSalmanKhan for PRDP #AskSrk” surfaced, Shah Rukh extended his support to the team of Sooraj Barjatya’s film.

He shared: “My love and best wishes to the whole team.”

Salman will offer his fans a Diwali blast this year with “Prem Ratan Dhan Payo”, which also stars Sonam Kapoor. He’s returning in an innocent avatar as Prem – an onscreen name he has taken on several times in the past. And the first look has already sent a message that the film will be all about love, fantasy and romance.

SRK and Salman are known for their bittersweet bond off-screen, but on the big screen, they have shared the frame in films like “Karan Arjun”, “Hum Tumhare Hain Sanam” and “Kuch Kuch Hota Hai”.

Over some time now, it seems they are writing a new chapter of healthy competition in Bollywood as Shah Rukh unveiled the first look of “Bajrangi Bhaijaan”, and Salman has maintained that there will be ‘double dhamal’ with his “Sultan” and Shah Rukh’s “Raees” releasing on Eid in 2016.