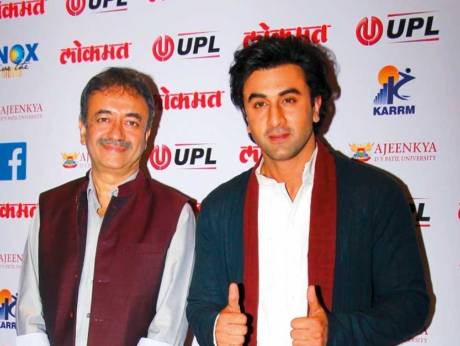 In a video released by Fox Star Hindi, Ranbir reminds director to make one more film with him to continue his tradition of making two films with all his actors. Ranbir tells the director, “Every actor you have worked with, you have always done two films with  him. Aamir Khan – 3 Idiots and PK, Sanjay Dutt – Munna Bhai MBBS and Lage Raho Munna Bhai. Humaara ek hi huya hai toh woh bhoolna mat. (Don’t forget one is still left).”
To this Hirani replied saying, “I don’t think I will do two films with you.”

And the video abruptly ends there. This reply coming from Rajkumar Hirani for Ranbir has left audience wondering what went wrong between two because earlier in many conversation with media, Hirani kept saying good things about Ranbir. He even went up on comparing Ranbir with Aamir’s dedication.

“I have been lucky enough to work with some great talent like Aamir and Ranbir. Ranbir’s dedication is like Aamir’s; he surrenders himself completely to the film. He would arrive at 3 am; it would take him five hours to do the makeup and it would take one and a half hours to remove it but he never complained once. He mingles around with the unit like an assistant. Anybody can pick up the phone and call him, say whatever one wants to say; he is open to criticism,” said director earlier on his collaboration with Ranbir Kapoor.

Even once he expressed his desire on working with Ranbir again too. Lets wait for another part of video to unfold. Stay tuned with us for more Bollywood news and updates.