Birthday Special: Rare Facts About Alia Bhatt As She Turns 24!

Alia Bhatt who turned 24 today has proven her mettle as an actor and as a performer time and again with her choice of films and scripts. She has chosen roles that justify her versatility and has gathered millions of admirers over a short span of time in the industry. On her special day the dimpled beauty’s half-sister Pooja Bhatt took to Twitter to wish Alia by sharing an adorable picture of the duo in which Alia is just a tiny little girl sitting in Pooja’s lap. Have a look at the picture: 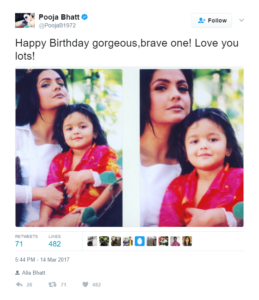 On the ‘Student of the Year’ debutante’s 24th birthday, we bring to you some lesser known facts about her: