These days Priyanka Chopra is grabbing the headlines for her relationship with Nick Jonas. Yes, the actress is dating American singer and actor Nick Jonas. Recently, Nick was in India to meet Priyanka’s mother Madhu Chopra and couple of days back the duo were spotted on a dinner date. They were seen walking hand-in-hand. 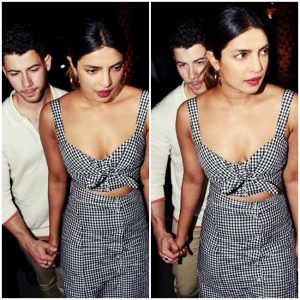 Priyanka Chopra dating Nick Jonas started in 2017 when they were seen together in ‘Met Gala 2017’. Priyanka and Nick have been spotted together at various events and shows together. A few days back internet was flooded with pictures of Priyanka attending Nick’s cousin Rachel Tamburelli’s wedding. They were seen walking hand-in-hand and she couldn’t take her eyes off Nick. Priyanka has developed a good bonding with Nick’s family as well and she has enjoyed a lot at the wedding in Atlanta. 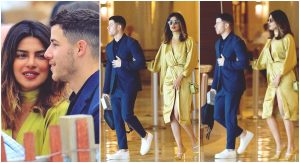 Now, Nick and Priyanka are in Goa and also Parineeti Chopra and Peecee’s brother Siddharth Chopra have accompanied the couple. Both the sisters are seen dancing in the rain but Nick was not seen in the video. Parineeti posted the videos of their rain dance. In one of the pictures, Nick is seen in a black tee, sitting beside Priyanka at the food table.

As per reports, Priyanka is serious about her relationship with Nick and all set to take it to the next level. She is reportedly moving in with Nick when she’ll head for LA. A source was quoted saying to Life & Style, “Nick is telling pals that she is the one and he’s asked her to move in with him. Nick loves that Priyanka is older and more mature than his exes. There’s no game playing. They have a really easy relationship.”

We are happy for the couple. What about you? Do let us know in the section below.