The popularity of Keeping Up With The Kardashians was so immense that it catapulted the career of all Kardashian sisters and made them an overnight star.

One of the highest-grossing reality shows that completely changed the television experience of the viewers in 2007 with its first show giving a sneak-peek into the lives of Kardashian clan, has now come to an end with its last episode going on-air in 2021.

The popularity of this show was so immense that it catapulted the career of all Kardashian sisters and made them an overnight star. By now people from across the globe know about them, their personal lives, relationships and family secrets. After entertaining its humongous fan base for 14 long years, the KUWTK will soon go off-air after its last episode that is scheduled to premiere next year. Paying tribute to the show, Kim Kardashian took to her Instagram account with a heavy heart and shared a heartfelt goodbye to the show.

Sharing an old poster of the show on her Instagram handle, Kim wrote, “To our amazing fans –  It is with heavy hearts that we’ve made the difficult decision as a family to say goodbye to Keeping Up with the Kardashians.  After what will be 14 years, 20 seasons, hundreds of episodes and numerous spin-off shows, we are beyond grateful to all of you who’ve watched us for all of these years – through the good times, the bad times, the happiness, the tears, and the many relationships and children. We’ll forever cherish the wonderful memories and countless people we’ve met along the way.”

Kim also thanked her media partner and everyone who worked so hard to make this show a success. “Thank you to the thousands of individuals and businesses that have been a part of this experience and, most importantly, a very special thank you to Ryan Seacrest for believing in us, E! for being our partner, and our production team at Bunim/Murray, who’ve spent countless hours documenting our lives.” 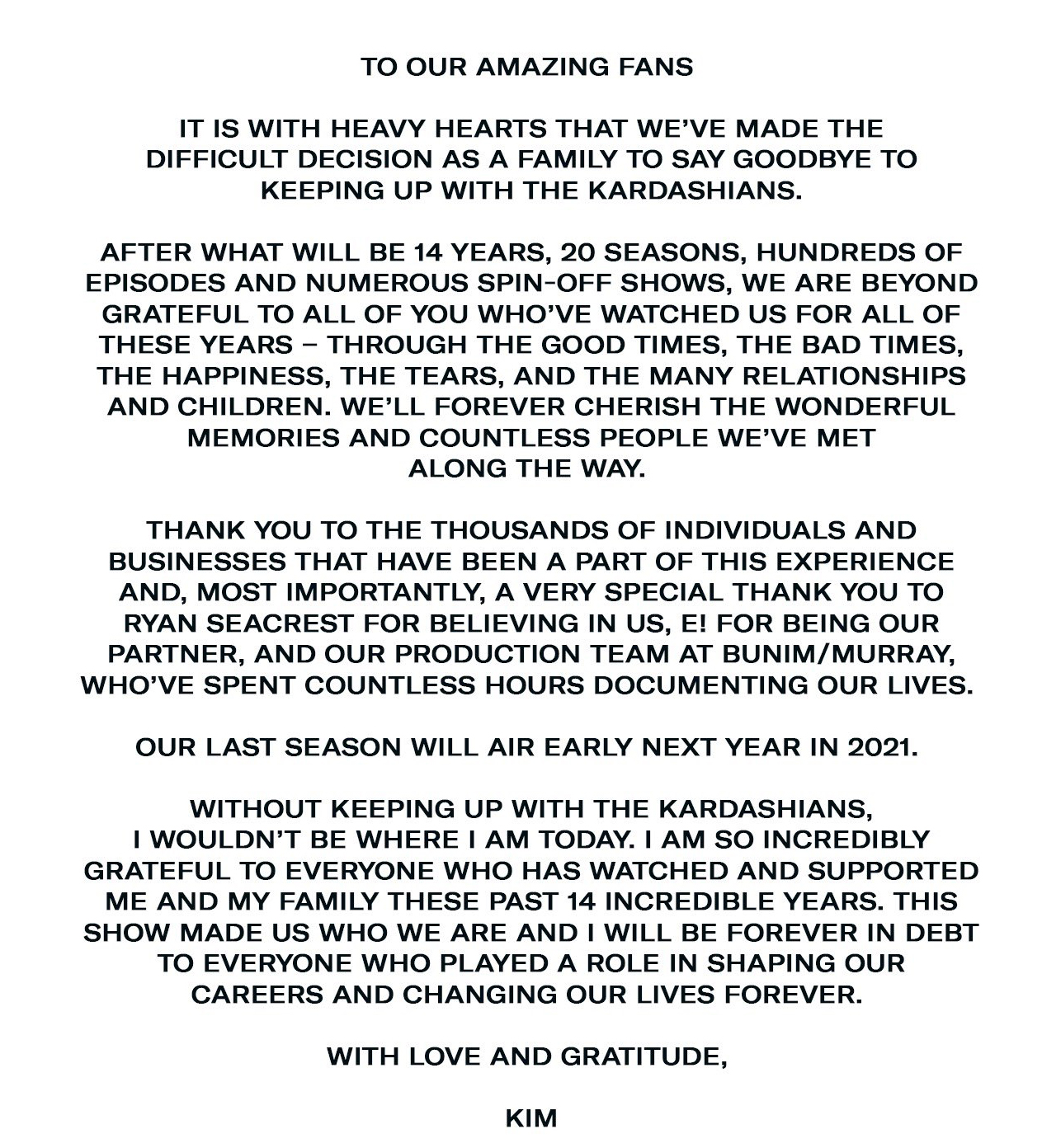 The social media queen Kim Kardashian West also runs businesses like cosmetics, fragrance company KKW Beauty, and now also is venturing in shapewear. Her estimated total net worth is $900million while her half-sister Kylie Jenner, who is a founder and owner of makeup company, Kylie Cosmetics, has been declared the world’s youngest “self-made” billionaire at age 21, by Forbes.