With the recent announcement of Madhuri Dixit Nene and Sanjay Dutt being cast together in Karan Johar’s next, ‘Kalank’, there is a lot of excitement in the people for this movie! The movie also stars Aditya Roy Kapur, Sonakshi Sinha and Varun Dhawan, Alia Bhatt. Kiara Advani will be seen doing a cameo! Here comes another one joining the brigade, the new one is none other than the pretty lady Kriti Sanon! 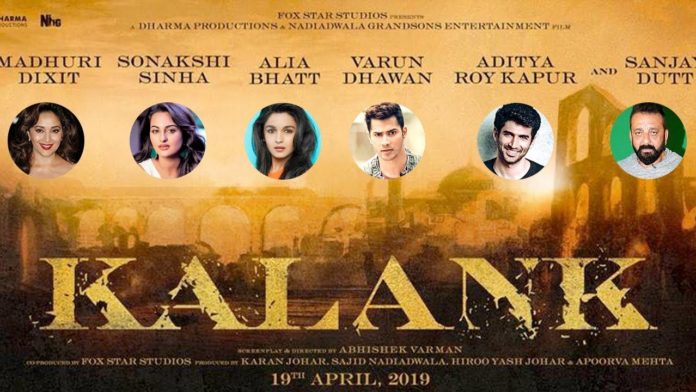 Kriti Sanon has joined the Kalank brigade for a special number!Â This is Kriti Sanon’s first tryst with Dharma Productions where she is expected to be part of a “special song”. Sharing her excitement, she shared a video of the dance rehearsal session from the sets captioning it as, “Excited for this one!! 💃🏻Happy to join teamÂ #KalankÂ for a super special song.. and my first withÂ @dharmamovies@karanjoharÂ ❤️❤️ !!Â @varundvn#AdityaRoyKapurÂ @remodsouza“

A source says, “Kriti will be seen in an item number in the period saga. Kriti’s song is extremely desi and raunchy. It’s a groovy track that will surely be another chartbuster.â€ Kriti will shoot the number this week with Varun Dhawan and Aditya Roy Kapoor.

Varun Dhawan too shared a video over his social media about this special song sequence captioning it as, “#AdityaRoyKapur will begin shooting for #kalank today. @karanjohar came to check on his rehearsals and revealed a beautiful surprise. @kritisanon also joins #Kalank. Good Friday just got bigger 2019″

The team has welcomed Kriti quite happily as Karan Johar in the video is seen introducing Kriti as a surprise!

Talking about it, the actress said, â€œIt’s a very special song and a full-on masala Bollywood track that makes you groove instantly. It’s my first work association with Karan and Dharma Productions and I am thrilled about it. I haven’t done something like this before â€” whether it’s the song or the the way I’ll look, so I’m very excited.â€