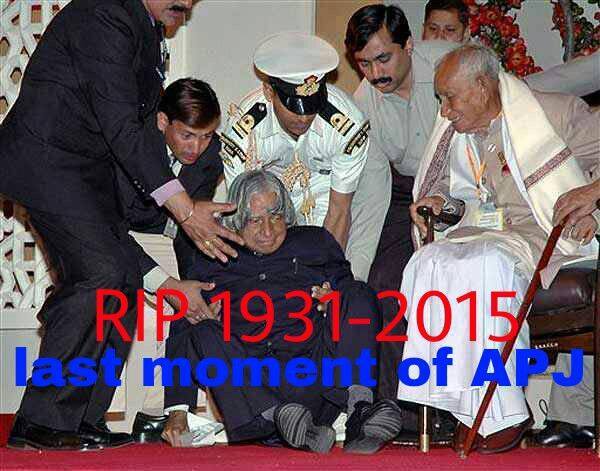 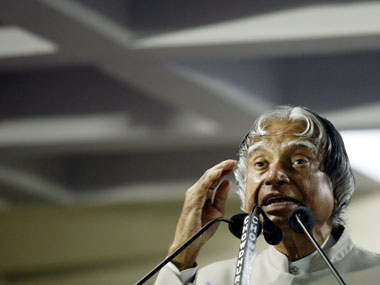 Former President APJ Abdul Kalam, the ‘missile man’ who came to be known as ‘People’s President’ died on Monday after he collapsed during a lecture at the IIM in Shillong on Monday evening.

Kalam, who would have turned 84 in October, was confirmed dead more than two hours after he was wheeled into the ICU of Bethany hospital in a critical condition following the collapse at around 6.30 pm.

According to reports, Kalam suffered a massive cardiac arrest during the lecture at IIM, Shillong.

Considered the most popular President, Kalam became the 11th head of the state and occupied the post between 2002 and 2007 but lack of consensus denied a second term in office for a man who came from outside political spectrum.

Meghalaya Governor V Shanmughanathan, who rushed to the hospital on hearing the news of his admission, said Kalam died at 7.45 pm. Despite medical team best efforts, he could not be revived.

Chief Secretary PBO Warjiri told reporters outside the hospital that he had spoken to Union Home Secretary LC Goyal asking for necessary arrangements to be made for carrying Kalam’s body from Guwahati to Delhi on Tuesday morning.

“The former President has been admitted to Bethany hospital in a critical condition,” M Kharkrang, SP Khasi Hills said earlier.

Doctors from the army hospital and North Eastern Indira Gandhi Regional Institute of Health and Medical Sciences (NEIGRIHMS) rushed to Bethany hospital but their efforts proved to be of no avail.

A seven-day national mourning will be declared by the Centre, Union Home Secretary LC Goyal said. Both the Houses of Parliament are likely to make obituary references and adjourn as a mark of respect to his memory.

Avul Pakir Jainulabdeen Abdul Kalam rose from humble origins to become the President in the most unexpected manner during the NDA government under Atal Bihari Vajpayee after an all party consensus minus the left parties that saw him through in an election which he won handsomely. 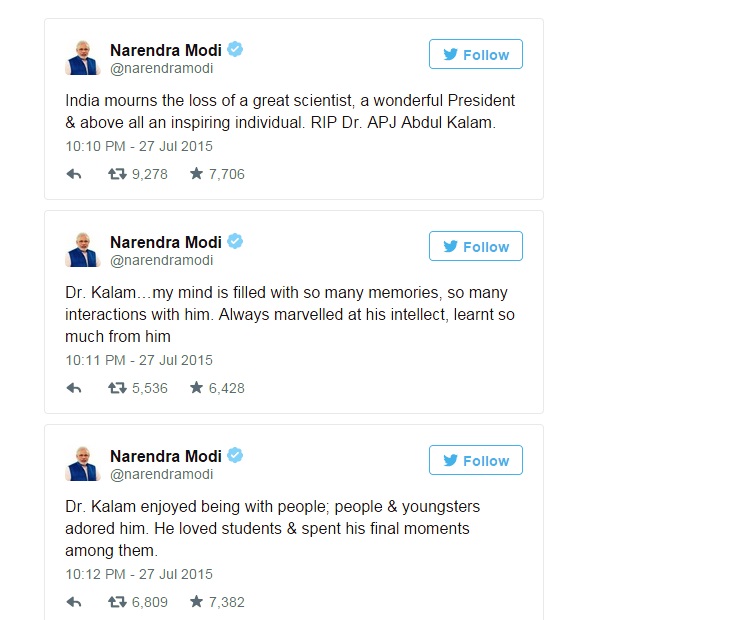 “He had a special love for children and fought to constantly inspire the youth of our country,” said President Pranab Mukherjee. “Dr Kalam will be long remembered for his passion, science and innovation and his contributions have enabled scientists, educationists and writers. His achievements as leader of DRDO vastly enhanced the security of our nation.

“In his passing away, we have lost a great son of India who dedicated his entire life to the welfare of his motherland. Dr Kalam was a people’s president during his lifetime and will remain so,” the President said.

“I got to work with him closely. I have lost an uttam marg darshak. The country has lost a son who worked for the strength of India. He had spent every moment for the youth of India. No person will be able to fill the gap left by him. His work will inspire us to work for the development of the nation,” said Prime Minister Modi.