Nepotism has become one of the controversial topics in Bollywood. The nepotism debate started after Kangana marked Karan Johar as the flag bearer of nepotism on the chat show, ‘Koffee with Karan’. Since then, every star kids get launched, they become the victim of accusations by the public. People call them ‘products of nepotism’. Well, it is a never-ending topic and now the debate has started with two different B-Town personalities. 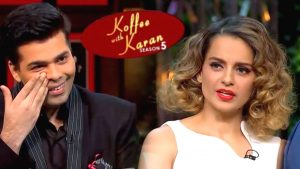 The one is ‘Queen’ of TV screens Ekta Kapoor and the other is Tiger Shroff’s mother Ayesha Shroff. It so happened that Ekta took to Instagram and shared a poster of her upcoming movie ‘Laila Majnu’. She captioned the pic as: “Promo in two hours max! Pls see a glimpse of this piece of cinema about raw timeless love untamed by the commerce of films helmed by the best @imtiazaliofficial and lived by two yet unknown talents who have no film legacy or star fathers or godfathers.” 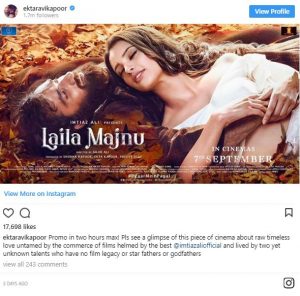 This post irked Tiger’s mom Ayesha and she replied back Ekta. She wrote: “It’s not a sin to have a star father my dear! Hard work and talent is the same no matter what caste, creed or lineage!!!”

Ekta is not someone to stay quiet. She replied back saying, “Not at all ma’am! I have one but you have to admit for a producer to sell market and turn around a film with newcomers is far tougher with no lineage attached! This is no slight to any star kid least of all tiger who is FANTASTIC! But a request to give other kids a chance too.” 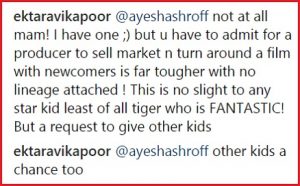 We don’t know who is right and who is wrong. Nepotism is a much-debated topic. Who do you think is right-Ekta or Ayesha? Let us know in the section below.