Facebook Twitter Tumblr Pinterest Messenger Messenger WhatsApp Telegram
This season is the best among all other seasons that happened till now. Thanks to the amazing TRPS of the show, Bigg Boss 13 has now been extended till February 2020. The show always ends on January first week but this year’s finale will take place in the first week of January 2020 because the show extended for five weeks and it will end on February 15, 2020. When the news was announced to the housemates, all were very excited and happy except Sidharth Shukla. Sidharth Shukla was not happy with it and the makers had to increase his payment.
Sidharth Shukla has signed a contract with the makers which is till January 12, and now that the show’s finale has been postponed. He asks to raise his fees to keep him in the show. Sidharth Shukla reportedly gets Rs 9 lakhs per week, and now, for the extended period, he’ll get more.
Read More: Next Level Gandi Baat’ In Bigg Boss 13: Hilarious Unseen Actions Performed By All The Contestants, Watch Video 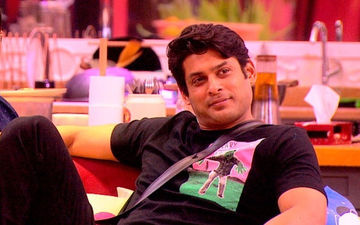 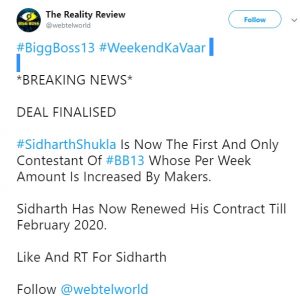 Makers are keen to keep him in the show as he is one of the strongest contestants. His popularity among fans is raising the TRPs.His fights and the way he proves himself always calls for attention. He is considered to be the top finalists of the show and even Salman Khan is pretty fond of him.
Tags
actor Actress ads Bigg Boss fight Film life musix