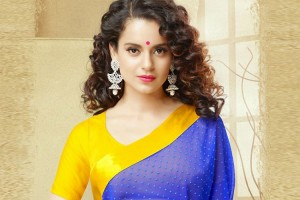 Kangana Ranaut, whose childhood in a small town of Himachal Pradesh was devoid of fashion influences, has fast emerged as an effortless style diva in Bollywood. Taking this a step ahead, the National Award winning actress has turned designer for a limited edition line of a brand. And she hopes to go a notch higher by launching her own label in future.
For her first tryst as a designer, Kangana has associated with European brand Vero Moda.

She said: “I would definitely like to have collection of my own or label of my own.”

“This (association with the brand) could just be a starting step to that. I want to know how my association with Vero Moda goes, how it evolves in the season. It will be a siginificant step towards that direction,” added the “Queen” of Bollywood.

Coming from Himachal Pradesh and with no film background, Kangana has made a niche for herself in Bollywood and delivered pathbreaking films like “Fashion”, “Tanu Weds Manu” and “Tanu Weds Manu Returns”.

Clearly, acting is not the only aspect of showbiz that Kangana wants to involve herself in. She stepped onto the other side of the camera for her last released film “Katti Batti”, seven minutes of which she directed herself.

She also pursued a screenplay writing course in New York, and now she has taken up designing. Did she take up any professional training in designing?

“I wish I did, but unfortunately I didn’t have that much of time. I think it’s always good to have the proper understanding, that technical understanding of every aspect. I like to be prepared for everything that I do but it was too short a notice for me,” she said, by adding that she had a group of designers who worked with her day in and day out to help in her first collection.

“They kept me informed about season trends and global trends,” she said.

The designs include casual, formal and occasion wear.

The actress showcased her designs at a gitzy fashion evening attended by the creme de la creme of Mumbai at Mehboob Studio here on Wednesday night. The collection was presented on the runway through a splendid fashion show, where Kangana herself was the showstopper. Making a rare appearance for supermodel Ujjwala Raut.

Asked if designing was always on her mind, Kangana said she wanted to explore the medium at some point of her life.

“It was always there at the back of my mind, but I never thought that I will venture into something which is a parallel world or business altogether, so early.

“I think I just grab every opportunity I like. I think you can never be ready to start something from scratch, you just go with the flow,” said the 28-year-old, recalling how fashion was not something that she ever thought of while growing up.

“In India, cinema is a very important medium for setting fashion trends but since I was a science student, I was not that much into it (fashion).”