The beloved couple of Cricket and Bollywood world, Virushka, on Thursday, finally broke ‘the biggest news of the year’ on the photo-sharing app, Instagram announcing the pregnancy news and the arrival date of their bundle of joy.

Soon to be father, Virat taking to his Instagram account posted a photo with wifey, Anushka flaunting her baby bump, along which he wrote a caption that read, “And then, we were three! Arriving Jan 2021”. After which his post started to flood with congratulatory comments and wishes for the soon-to-be parents. Going by the post and the date of arrival of this already a superstar, it seems like Anushka is four months pregnant. Bathing in the motherly glow, the actress looked stunning in the black and white polka dot dress.

Sharing the same post on her page, Anushka was bombarded with congratulatory notes and wishes from the Bollywood stars including; Alia Bhatt, Priyanka Chopra, Taapsee Pannu among many others. 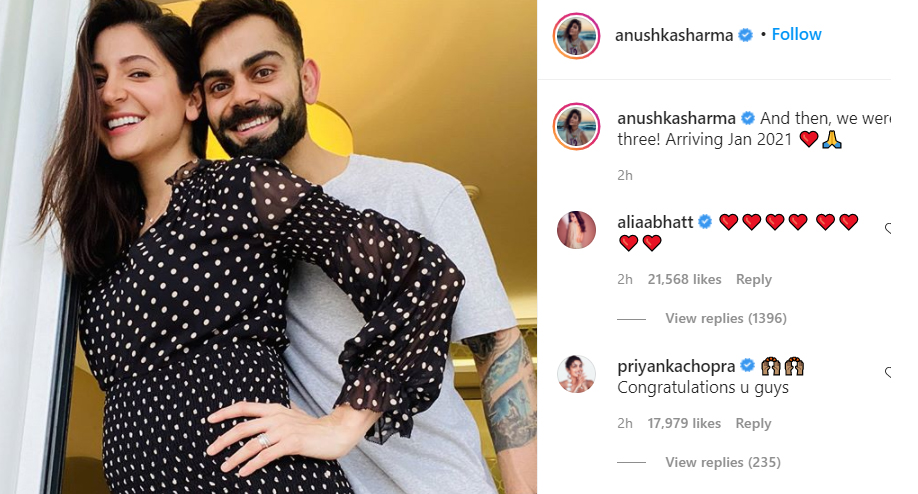 Interestingly, Anushka Sharma was one of the few celebrities to have faced pregnancy rumors for the longest time. Responding to the pregnancy talks, the actress had told Filmfare the previous year, “Yeah. If you’re married then people ask, is she pregnant? They love to read into something when there really isn’t anything.”

For unversed, Anushka Sharma and Virat Kohli were married on December 11, 2017, and after that, she has only one release in her name ‘Zero’ in 2018 and hasn’t announced any new venture till now. However, on the work front, the India cricket team Capitan Virat Kohli is currently in UAE to participate in IPL 2020.

Rhea shares a video of media outside her building; asks “How is this family going to live”