Screenshot of a deleted Facebook post written by an associate of filmmaker Mahesh Bhatt, Suhrita Das is now making rounds on social media platforms. What made this post go viral is the time at which it was written that is on June 14, at 11.08 am, shockingly! hours before the world was officially aware of Sushant Singh Rajput’s demise. It was the time when his bedroom door was still locked and wasn’t being opened till 12:25 pm, as per reports.

The Facebook post in question was addressed to Sushant’s girlfriend Rhea Chakraborty. However, within minutes of uploading this, Suhrita reportedly deleted the post and also locked her FB profile soon after people started talking about it. The post had surely created huge chaos among fans, who were still unaware of the fact that Rajput was dead as the room door was not opened, and his death was not yet known to his fans, thus, questioning this aspect of her post.

The alleged post by Suhrita talks about SSR’s death and claims that the actor was battling clinical depression, “Dear Rhea, when the world will be pouring grief for Sushant Singh Rajput and expressing shock and condolence, I stand by you firm and strong. Having been a silent spectator to your impossible attempts at trying to keep him together and going… it is my moral duty as a mother and a citizen of this country to tell once and for all that clinical depression is a catastrophe that medical science has no solution or answer to.” 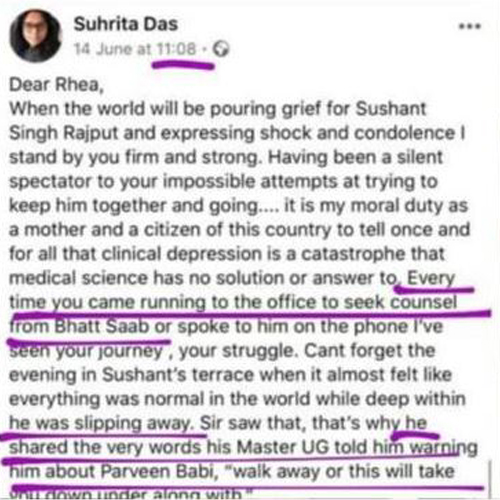 “Every time you came running to the office to seek counsel from Bhatt saab or spoke to him on the phone, I have seen your journey, your struggle.”

“Can’t forget the evening in Sushant’s terrace when it almost felt like everything was normal in the world while deep within he was slipping away. Sir saw that, that’s why he shared the very words his Master UG told him warning him about Parveen Babi, walk away or this will take you down under along with.”

“You gave your everything and more, you did more much more than your bit woman. Love you my Jalebi. Stay strong.”

Taking the cognizance of the post, BJP Rajya Sabha MP Subramanian Swamy on Sunday had retweeted a tweet by an unverified Twitter account, named @nepotismhood, which had the screenshot of Suhrita Das’ viral Facebook post. Along with the picture of original post, Swamy wrote, “How this lady from Bhatt gang can write this post on 11 am? The time they were looking for a key maker. Alert, such an important evidence guys, please do read this and viral it.”

Already suspecting a foul play the fans of Sushant Singh Rajput’s are also questioning how is it that such a post was published hours before the actor was found dead?

You’re an insider only if you have a box office success, feels Kunal Khemu