Everyone raved about Vicky Kaushal’s performance in the movie ‘Sanju’. After Sanju, the actor started shooting for his upcoming movie ‘Uri’. The movie is based on the surgical strike conducted in POK by the Indian army last year. Vicky is currently shooting for his film in Serbia. While shooting for an action sequence, the actor injured his right arm last week. Vicky returned to Mumbai for a few days over the weekend for a prior commitment. 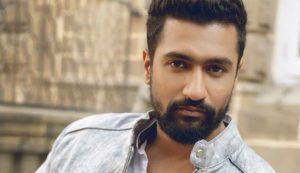 According to a source, Vicky had been training daily because the film requires him to pull off some daredevil stunts. During one such sequence, he injured his arm badly and was in unbearable pain. “The doctors said it was due to muscle inflammation and overexertion. He has been undergoing daily physiotherapy sessions. However, Vicky has resumed the shoot in Serbia despite the injury. The team has made arrangements and planned the schedule in a way to ensure that the injury isn’t aggravated,” added the source.