Speculations about the relationship status of Varun Dhawan have been rife for quite some time now. A lot has been said and written about his alleged affair with Natasha Dalal but the actor has never spoken about it in public.  Though, Varun has often been spotted with Natasha at various occasions, the most recent one being, Shahid Kapoor’s pre- birthday bash. The duo was clicked entering hand in hand at Shahid’s residence in Juhu. Though Varun has always remained tight-lipped about his relationship with Natasha, it was quite obvious that they have been dating. 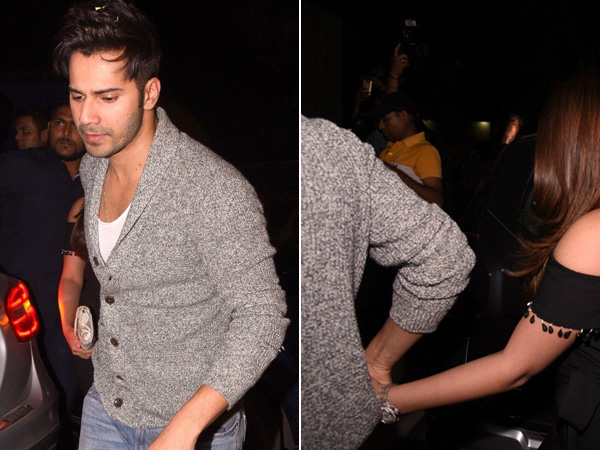 For the longest time now we have been getting to hear stories of Varun Dhawan‘s “alleged” love affair with Natasha, but not anymore… The actor has FINALLY made it official with his girlfriend Natasha Dalal. So, the shutterbugs snapped Varun and Natasha entering hand- in- hand at Shahid Kapoor’s pre-birthday bash at his residence in Juhu. We had always known that Natasha and Varun were always a thing and a couple of times, the actor did make it pretty obvious, though he never really commented on his relationship. But these pictures are in itself is a proof that Varun is seeing Natasha. Gosh! We are so happy that he’s finally decided to go public with her.

Well, Varun isn’t one of those actors who has ever shied away from admitting to being in a relationship. But he never made any official statements about it either. Just recently, we spotted Varun outside a restaurant in Bandra along with his girlfriend on Valentine’s Day. Varun was the first one to walk out while Natasha followed. As the actor sat back in his posh ride, we noticed a hell lotta heart balloons in the backseat. Isn’t that so romantic? Not just that, when he appeared on Koffee With Karan 5 with Alia Bhatt to promote ‘Badrinath Ki Dulhania’, Karan quizzed him about Natasha Dalal. The actor mentioned that Natasha is a very very close friend of his and they have known each other since childhood. They even went to the same school. He further went on to say that he is happy in his personal life because of someone special who has kept him like that for many many years. Ahem!

With both of them coming together for Sasha’s bash, Varun has sort of made it official!