Since a couple of months, Alia Bhatt has grabbed the headlines. Her recent pictures are going viral on the internet. These days the starlet is posting adorable pictures from the sets of ‘Brahmastra’. Also, her black Cinq A Sept dress that she wore in Priyanka-Nick’s engagement made her fans crazy and they were swooning over her stunning looks. 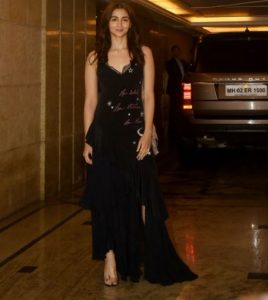 The latest picture of Alia that has surfaced on the internet is with a newlywed couple. The picture is shared by Instagram handle Instant Bollywood with a caption, “Such a sweet gesture by Aaloo ❤️.”

From the caption, we get an idea that the bride is Alia’s maid. The picture is a little old as Alia looks young in it. That’s such a sweet gesture by the ‘Raazi’ star. We rarely see this kind of gestures from celebrities. Alia gracing the wedding of her domestic help is such heartwarming, isn’t it?

On the professional front, Alia is currently shooting in Bulgaria for Ayan Mukherji’s superhero movie ‘Brahmastra’. It is a trilogy produced under the banner of Dharma Productions. The movie also stars Ranbir Kapoor, Amitabh Bachchan, and Mouni Roy. Alia will also be seen in ‘Gully Boy’ opposite Ranveer Singh. The movie is releasing on Valentine’s Day next year.