Saif Ali Khan and Kareena Kapoor Khan’s munchkin Taimur has become a national heartthrob since the day he is born. He is 17 months old and has ruled everyone’s darling. Everyone’s mood gets lighten up seeing the pictures of Taimur. From his airport pictures toÂ taking his first steps, every single thing of this cutie pie cheers up everyone’s mood.Â 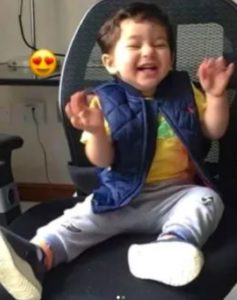 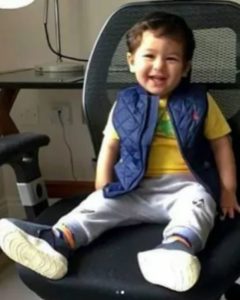 Many times we have seen Taimur in a glumÂ mood and sometimes he is seen crying. But the latest pictures of Taimur will make your day. The ChotaÂ Nawab is seen in a good mood and he is seen giggling. He is dressed in a yellow t-shirt and an indigo jacket and he is too adorable. Taimur is at present in London holidaying with his parents and having a gala time.

In a recent interview, Bebo said, â€œMy time with my son – because it’s not on social media or no one knows about it – does not need to be (made public). Just because I don’t post a picture with him or I don’t carry him at airports doesn’t mean I don’t spend time with my son. I believe in quality over quantity..and what my time and my bond is with my son, I don’t need to announce to the world. Are we saying that mothers who work don’t spend time with their children? It’s not like that.”

Coming back to Taimur, the cool pictures of him has beaten the mid-week blues. What do you think about the pictures? Aren’t they cute? Do let us know in the section below.

Tiger Shroff’s Sister Krishna Shroff Is All Set To Make Her Bollywood Debut!