The Agra University has issued a marksheet to a first-year BA student with superstar Salman Khan photo on it. The officials of the university found about the mistakes when they were cross-checking the results before handing it over to the students. The university is blaming everything on the private agency, which was given the responsibility of preparing the marsksheets. 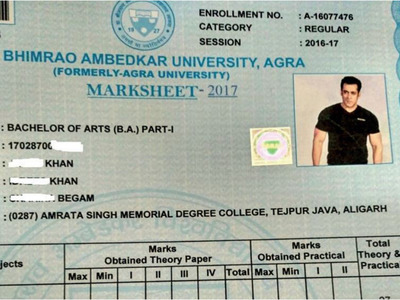 The university did rectify its mistake after it came to their attention. The marksheet belongs to a student of Amrata Singh Memorial Degree College in Aligarh. The college is affiliated with Agra University. The leading daily TOI has obtained a copy of the marksheet, where you can see a passport size photo of the superstar posted on it. The marksheet features the passport size photo of Salman Khan with the name of the student. The irony is that the student has scored just 35% marks.

This is not the first marksheet that has some discrepancy. According to the TOI report, there was another marksheet with a photo of Congress leader Rahul Gandhi. Talking about the discrepancy, the sources were quoted as saying, “There are scores of marksheets where Bhimrao Ambedkar’s name is printed in place of the name of the student. Such mistakes are usually committed by the private agencies to whom the job of printing the marksheets is outsourced,”

The PR officer of the university, G.S. Sharma has denied any such mistakes. He further added that they have not received any complaint regarding the same.

For 2016-17 session, 7.2 Lakh students have appeared for the examination taken by the Agra University. Last year, an inter college in Agra had issued the admit card for the high school exam with a photo of Sachin Tendulkar’s son Arjun Tendulkar.

President Ram Nath Kovid is scheduled to give the medals and certificate to students during the convocation at the Agra University in December.