Mahesh Bhatt’s directorial ‘Sadak 2’ has shattered all the records but majorly for all the wrong reasons. The movie trailer has become ‘the most disliked movie trailer’ in YouTube history, according to “MyTop100Videos” channel’s “Most Disliked Videos “. But as the saying goes ‘all publicity is good publicity’, it seems like the moviemakers not only in-cashing this but have also up their game.

When the netizens are giving it a thumb down, Alia Bhatt has again made ‘Sadak 2’ trending by sharing a sizzling photo of her lip-lock with Aditya Roy Kapur, in her recent Instagram posts. The photo is still from their film upcoming film ‘Sadak 2’, where the duo could be seen sharing a steamy kiss on a highway. 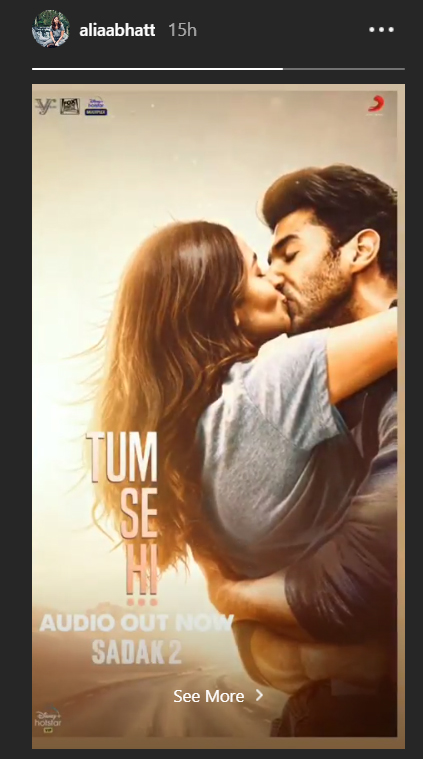 The trailer of 1991 blockbuster hit movie’s sequel, ‘Sadak’, was unveiled on August 12 and within 24 hours of its release the trailer by receiving over 5 million dislikes on YouTube became ‘the most disliked movie trailer’.  Till the time of writing this copy, the trailer has received over 8.5 million dislikes.

This outrage was witnessed over Sushant Singh Rajput’s tragic death, as it has started various campaigns online to boycott star-kids and a couple of other Bollywood biggies. It is alleged that the ‘Nepotism’ and ‘favouritism’ prevalent in Bollywood took the ‘Kai Po Che!’ star’s life.

Furthermore, daughter of director Mahesh Bhatt and also the lead heroine of original ‘Sadak’ movie, Pooja Bhatt also tweeted about all the negativity and outrage surrounding ‘Sadak 2’. She wrote, “Lovers/Haters two sides of the same coin. Gotta hand it to both for giving us their valuable time and making sure we are trending. Thank you for your wishes.”

The movie ‘Sadak 2’ is the sequel of 1991s blockbuster hit romantic-thriller ‘Sadak’ which was helmed by Mahesh Bhatt and had Sanjay Dutt and Pooja Bhatt in lead roles. The movie is slated to hit streaming giant Disney+ Hotstar on August 28.