Watch The Video From The Last Match

Ronaldo is one of the greatest football players in the world if not the greatest. However, his world cup performances have been pretty unpredictable. However, FIFA World Cup 2018 seems to be a totally different game altogether.

Ronaldo scored three goals yesterday, however, everyone is talking about his celebration after the first goal. After doing his classic celebration, he stroked his chin multiple times. His fans are convinced that he is declaring himself as GOAT (Greatest Of All Time). 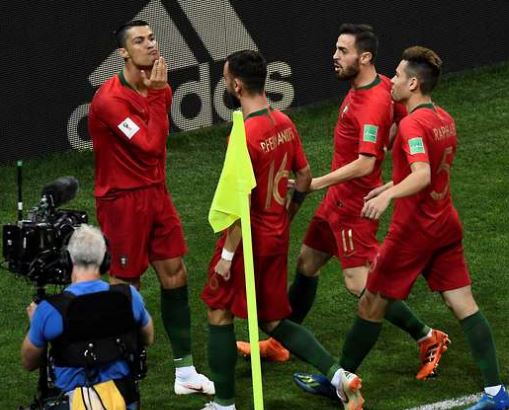 We wonder what Lionel Messi has to say about this?

As always, Twitter is having lots of fun with Ronaldo’s news celebration. Check out some of the reactions down below.

.@Cristiano was referring to a 🐐… He's the GOAT! #RonaldoBeardCelebration #PORESP #WorldCup #POR #ESP

There reason Ronaldo rubbed his chin to celebrate his first goal was because he is growing a goatee as per the G.O.A.T.

Ronaldo stroking his chin because he’s the GOAT 🐐

The man was clearly stroking his GOAT beard 🙄

Ronaldo touched his chin when he scored 😂! Signifying goaty beards= I am the fucking goat

Ronaldo celebrated a goal yesterday rubbing his chin, signifying to us fans he IS THE GOAT…. Messi saw the challenge, accepted it, failed. 🤷🏾‍♂️

Who is your favourite Messi or Ronaldo? Tell us your thoughts in the comment section down below. Stay tuned for more viral stories.

Mother of the man caught littering the street accuses and slams Virushka for PRIVACY VIOLATION!