Bollywood actor John Abraham has made a comeback with ‘Parmanu’ and the whole team of Parmanu was in a cloud nine situation due to the huge success of this historical action drama. Now, the handsome hunk is prepping up for his upcoming movie RAW-Romeo Akbar Walter. It is a spy thriller and John has teamed up with Ajay Kapoor’s Kyta Productions. 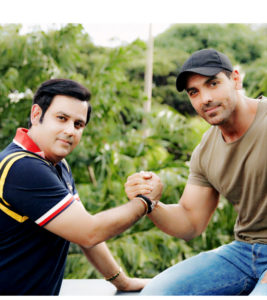 As per latest reports, John has started preparing for the shoot of the movie and it has gone on floors today. He visited producer Ajay Kapoor of Kyta Productions today. John took to his Twitter handle to share the news of the first day of shoot.

Directed by Robbie Grewal the movie was supposed to go on floors on 1st June, but due to reasons unknown, the shoot got delayed. It will be shot in various locations like Nepal, Gujarat, Srinagar, and Delhi for almost two months. Earlier Sushant Singh Rajput was to be part of the movie but due to unavoidable circumstances, he opted out of RAW.

We are eagerly waiting for RAW. What about you? Do let us know in the section below.