Popularly known as DeepVeer by fans, Deepika Padukone and Ranveer Singh got hitched in a super secret private wedding in Lake Como, Italy. Fans went crazy when first pictures from their wedding hit the internet. Both of them looked madly in love. Their wedding pictures proved that they are made for each other. Post their secret wedding, Ranveer Singh and Deepika Padukone are setting major couple goals with their three receptions. Third and final reception thrown by the newlywed is going to be grandest and star-studded. The first reception took place in Bengaluru. Ranveer’s sister threw a party after their Bengaluru reception. Now, Ranveer has revealed some interesting facts about his relationship with Deepika Padukone in an interview with Filmfare. Simmba actor added that he was always ready for it. He also talked about his eagerness of marrying Deepika but waited before his lady was ready for the same. He said,

“I’ve been ready for a while. I’ve been thinking about marriage seriously for almost three years now. I was just waiting for Deepika to be ready. It would happen whenever she had decided. I was fully ready and raring to go.”

On being asked when he realized that Deepika was the one for him, Ranveer said, 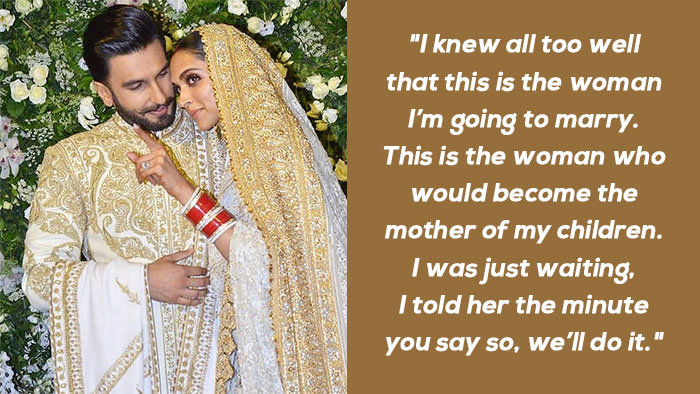 When they did get married, they did it in style. The star couple was able to pull off one of the most secret weddings at one of the most exotic locations in the world. On being asked about why he opted for Lake Como as their wedding venue, Baba said that he wanted Deepika to have whatever she wanted. He further added, “I too deserve happiness and my happiness comes from her happiness. It’s that simple.”