Acclaimed actress Rani Mukerji’s father Ram Mukherjee died on Sunday at 4:00 AM in the morning. According to the source, his body will be taken to his house ‘Janki Kutir’ at 10: 30 AM. The cremation is scheduled at Vile Parle Pawan Hans at 2: 00 PM. 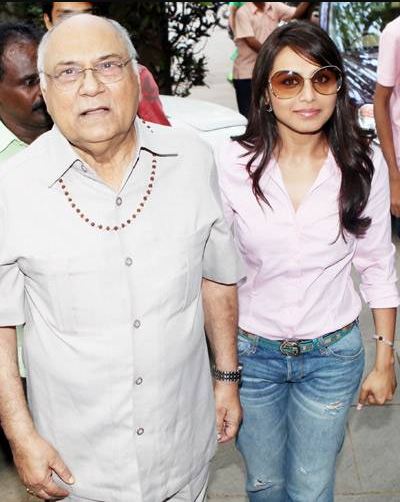 Ram Mukherjee was an Indian film director, producer, and screenwriter. He was also one of the founders of Flimalaya Studios in Mumbai. He is popularly known for films like Hum Hindustani and Leader, which featured Dilip Kumar and Vyjayanthimala.

Mukherjee- Samrath family is a well known family in the film industry. His wife Krishna Mukherjee is a playback singer, whereas his daughter Rani Mukerji is a very famous Bollywood actress. She has worked in numerous Bollywood films and has given several memorable characters. His son Raja Mukherjee is a producer and director, who has assisted his father in many films.

We are waiting for further details.

Sanjay Dutt's Daughter Trishala Seems To Be Ready For Her Bollywood Debut, Check Out Her Pictures