Kiara Advani and Sidharth Malhotra have paired up for the upcoming Captain Vikram Batra biopic which has been titled Shershaah. The shooting for first schedule of the movie Shershaah begun on May 7 in Chandigarh after which they moved to Himachal Pradesh for the same. Recently, Kiara Advani took to social media and announced that she has wrapped the first schedule of the movie and in her post she gave a special mention to her ‘rumoured boyfriend’, Sidharth Malhotra.

Sharing a candid photo of herself and Sidharth as her Instagram story, the 26-year-old actress wrote, “My rumoured boyfriend but legit friend it’s been a pleasure working with you this sched! See you on the next one.” In the picture, Kiara can be seen sitting with Sidharth looking at a photo album. The two seemed to be engrossed in conversation. 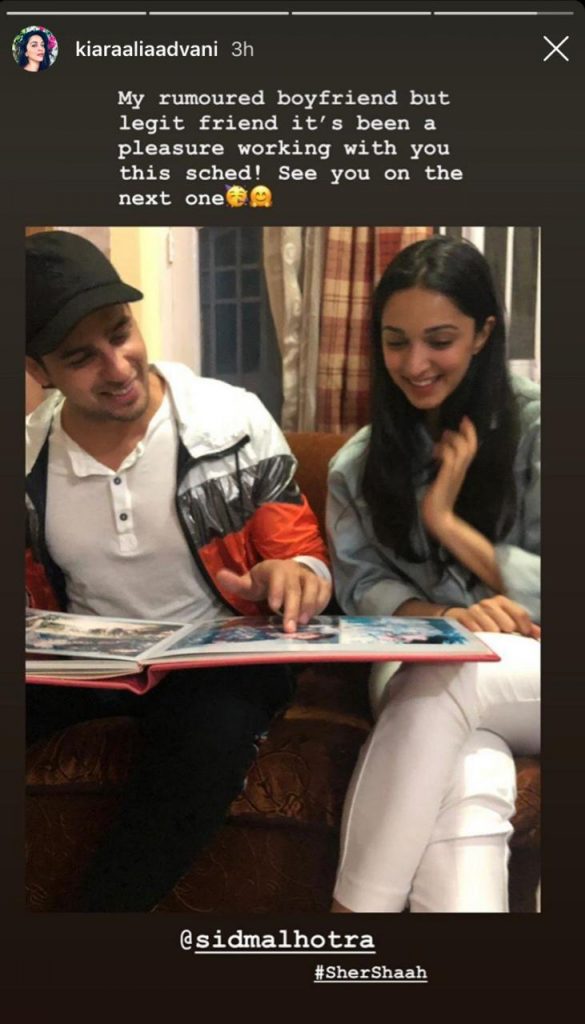 There has been a buzz in to B-Town since quite a long time that the lead stars of the movie Shershaah, Kiara Advani and Sidharth Malhotra have been dating each other for quite a long time now. Helmed by Vishnu Varadhan, Shershaah is based on the life of Captain Vikram Batra, an officer of the Indian Army who was posthumously awarded the Param Vir Chakra for his actions during the 1999 Kargil War in Kashmir between India and Pakistan. Captain Vikram Batra led one of the toughest operations in mountain warfare in Indian history. He was often referred to as “Sher Shah” in the intercepted messages of the Pakistan Army

After babymoon in Maldives, Arjun Rampal to host baby shower for mom-to-be Gabriella Demetriades in Mumbai?