Kangana Ranaut and controversies is a match made in heaven! The three-time National Award winner actress often gets surrounded with one or the other fiascos. Just a week ago, Shekhar Suman and his son, Adhyayen went on a Twitter rant against her and now it’s Karan Johar who had to say something about her. In a recent episode of ‘Koffee With Karan’, Kangana spoke her mind and called Karan a ‘movie mafia‘ and ‘flag bearer of nepotism‘. While Karan let the actress speak then, he later told the world how he actually felt on a Twitter AMA session. 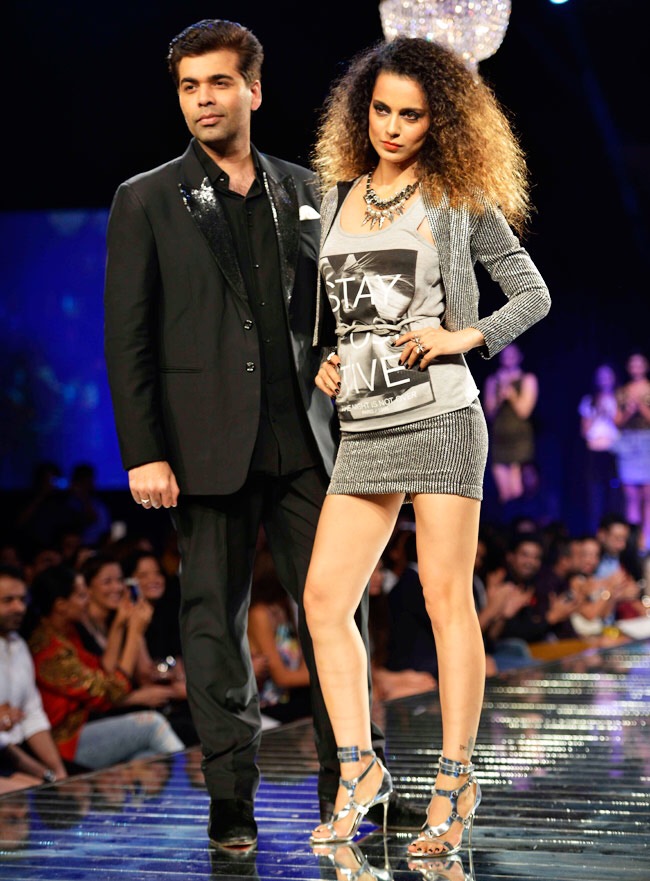 And now, in a recent interview, Karan Johar opens up about what Kangana had to say about him on the show. He said that everyone listened to Kangana’s remarks only because he gave a platform to her.

Not only Bollywood, but also the whole of India was taken by surprise when Kangana Ranaut called Karan Johar, the ‘flag bearer of nepotism’ on Johar’s chat show, Koffee With Karan season 5. Everybody has been wondering why Karan Johar, who generally speaks his mind, did not react to such serious allegations. 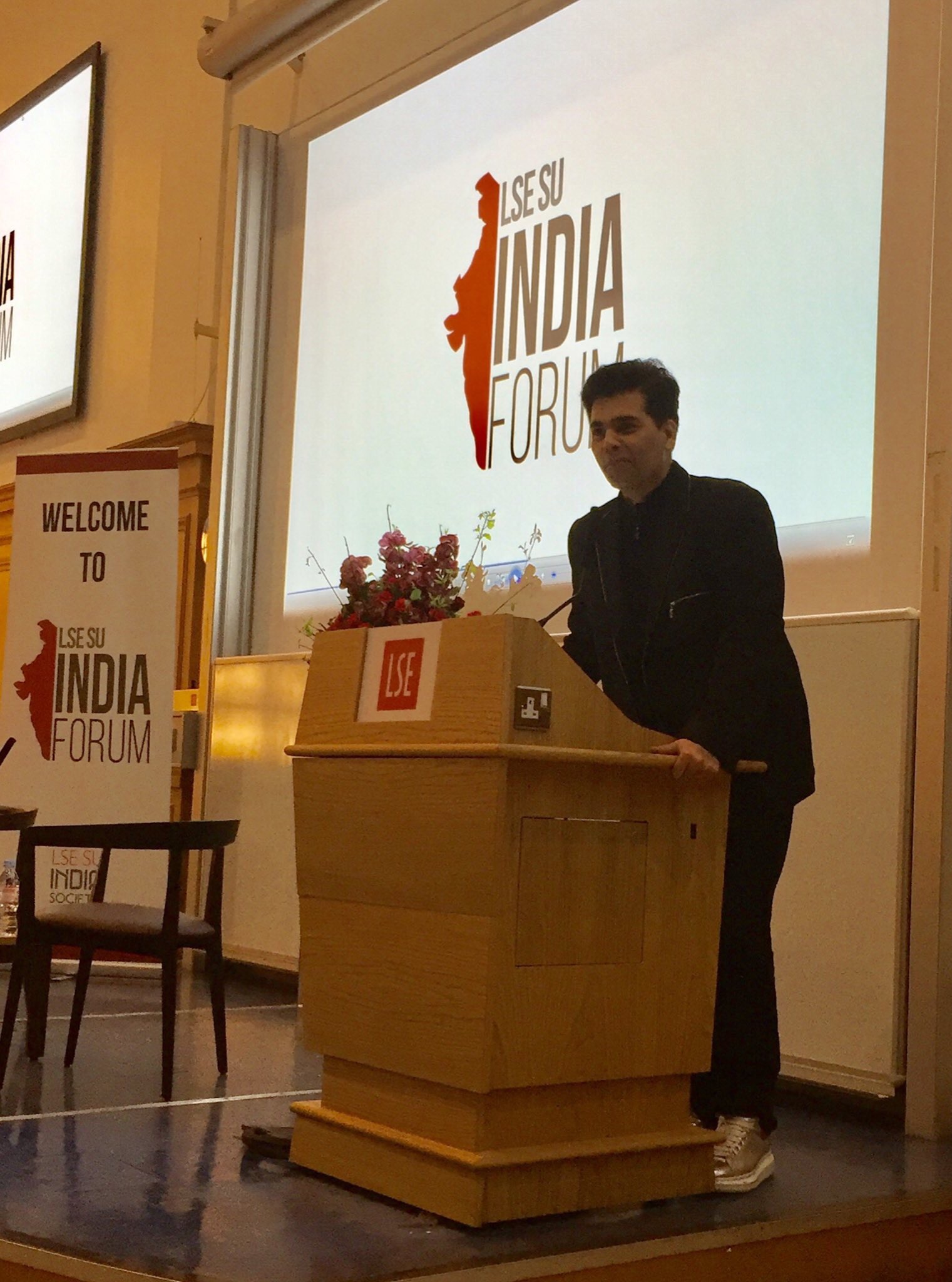 However, it seems Karan Johar has finally spoken about this issue in an interview taken by Anupama Chopra at the London School of Economics. Here’s what he said,

“She was my guest and I had to hear what she said. She has the right to have an opinion but when she says ‘flag bearer of nepotism’, what I want to say is I don’t think she has understood the entirety of that statement because what is nepotism? Am I working with my son, daughter or nephew? What about those 15 filmmakers who are not from the film industry? No one will talk about Tarun Mansukhani, Shakun Batra, Shashank Khaitan or a Punit Malhotra, who is a costume designer’s nephew, who came from no film background. You give these people a film career and I think that is the reverse of nepotism but that of course one would not get credit for. As far as actors are concerned, I have launched just two of them i.e. Alia Bhatt and Varun Dhawan. Sidharth Malhotra was just 1/3rd of them and had nothing to do with the movies. So I really didn’t get what she meant (sic).” 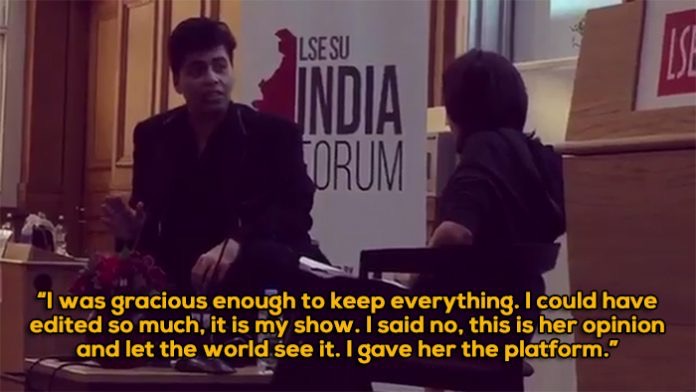 Then, Karan called out Kangana for playing the victim card and even advised her to leave the industry.

He also went ahead and spoke a bit about how Kangana should leave the industry if she continuously feels victimised, by saying,

“What does she mean by ‘movie mafia’? What does she think we are doing? Sitting here and not giving her work? Is that what makes us mafia? We do that by our choice. I do that because may be I am not interested to work with Kangana and that does not make me movie mafia, it makes me a man with an opinion. I appreciate that she had a great perspective and everyone lauded her for coming on my show. People said ‘she gave it off to Karan’ and I would say of course, but I was gracious enough to keep everything. I cut none of it and I do edit so much of stuff from the show. I was like let the world see her opinion. I gave her the platform to speak and now this is my platform so here I am speaking what I want to. I want to conclude by saying I am done with Kangana playing the woman card and the victim card. You can’t be a victim at every point of time who has a sad story to say as to how you have been terrorised by the bad world of industry. If that’s the case, leave it (sic).” 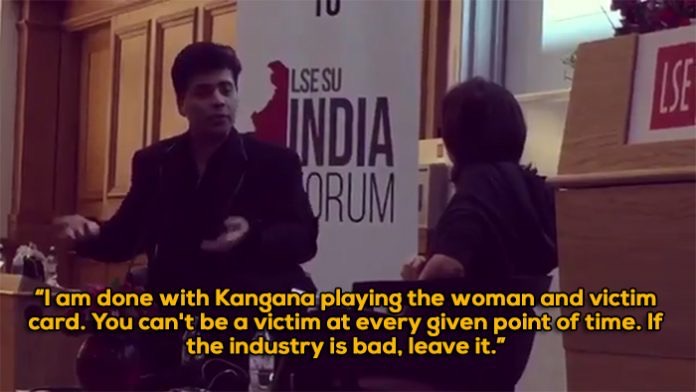 Watch him speak in the videos below :

Looks like Karan Johar won’t be providing a platform to Kangana Ranaut anymore!