We all know that ‘Dhadak’ is the most awaited movie of the year not because it is the Hindi remake of the Marathi blockbuster hit ‘Sairat’, but because it is Janhvi Kapoor’s Bollywood debut. Recently the trailer of ‘Dhadak’ released and it received lots of love and appreciations from the public. It’s still trending on social media. The promotions of the movie are going on full swing and makers are leaving no stones unturned to make it a huge success. 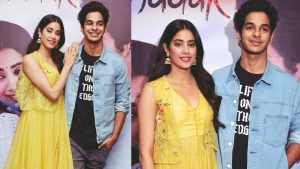 It seems Janhvi is working too hard even after the shoot of the movie. It so happened that during a promotional activity she fainted and Ishaan rescued her from falling. The video is going viral on the internet. 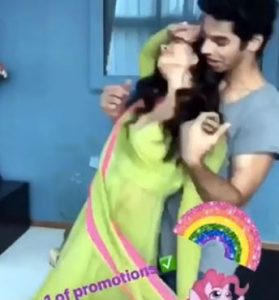 Well, nothing to be serious. Actually, it is a fun video by Janhvi and Ishaan and in the video, she is pretending to faint and Ishaan trying to rescue her. This video is shared by one of Janhvi’s fan pages. It is funny yet lovely.

Talking about Dhadak, it is an adaptation of worldwide popular Marathi epic movie ‘Sairat’ directed by Nagraj Manjule. It was an epic love story of two youngsters Archi and Parshya. Though it was a fresh pairing their performances were also endearing. The plot, storytelling, opening, conclusion-everything was just mindblowing. Directed by Shashank Khaitan, ‘Dhadak’ hits the screens on 20th July.