Janhvi Kapoor and Ishaan Khatter starrer movie ‘Dhadak’ is the most awaited of the year not because it is the remake of Marathi blockbuster ‘Sairat’, but because it is Janhvi’s debut film. The makers are leaving no stone unturned to promote the movie. From Jaipur to Lucknow, both the youngsters are promoting their movie in various cities. Recently they turned up in the dance reality show ‘Dance Deewane’ to promote the movie. Madhuri Dixit is one of the judges in the show. 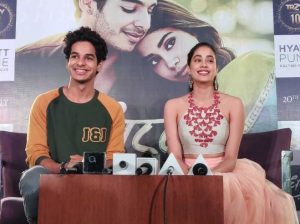 The duo also visited a mall in Pune for the promotion of the movie and crowd gathered in to see the electrifying dance of Ishaan and Janhvi. Now the couple is promoting ‘Dhadak’ in Ahmedabad. Janhvi being a complete foodie talks about being a fan of Gujarati Daal and planning to relish it with Ishaan in the city.

Here is the video from the event.

Talking about Dhadak, it is an adaptation of worldwide popular Marathi epic movie ‘Sairat’ directed by Nagraj Manjule. It was an epic love story of two youngsters Archi and Parshya. Though it was a fresh pairing their performances were also endearing. The plot, storytelling, opening, conclusion-everything was just mindblowing. Directed by Shashank Khaitan, ‘Dhadak’ hits the screens on 20th July.