The film which raised many eyebrows with the blockbuster film, Kabir Singh, gets trolled mercilessly over her latest post with co-actor Shahid Kapoor at the Global Spa Awards.

Kiara Advani looked no less than a seductress, her curves-highlighting in a golden shimmery gown from Nicolas Jebran at the Global Spa Fit and Fab Awards. 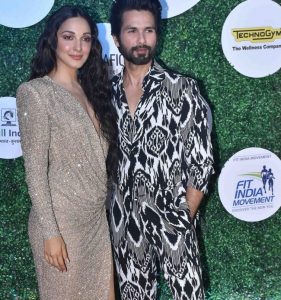 Netizens NOTICED  a change in Kiara’s look but impressed with Kiara’s bold make-up and they are trolling the actress for the same. It all happened when Kiara was posing for the media along with Shahid Kapoor on the red carpet at the event, See how netizen reacted on her Instagram pictures.

@mendez98_s: “Botox and fillers ruined her.”

@ruchi_pandey: “Seems she has tattooed her eyebrows after MS dhoni she doesn’t look natural anymore since after that film ?.”

@mera.vichar: “Makeup ruined the look…too much highlighter between eyebrows and she is so giving pose to look like Kareena.”

@incognito686: “Why is she looking so different here? like bad different ?.” @jessieanilgeorge: “Too much makeup so not looking nice on her.”

@annumgilani: “Everybody is coping @kimkardashian.”

On the work front, Kiara Advani will be seen next in Bhool Bhulaiyaa 2 opposite Kartik Aaryan.  Kiara is also gearing up for Good News, and the poster is out.