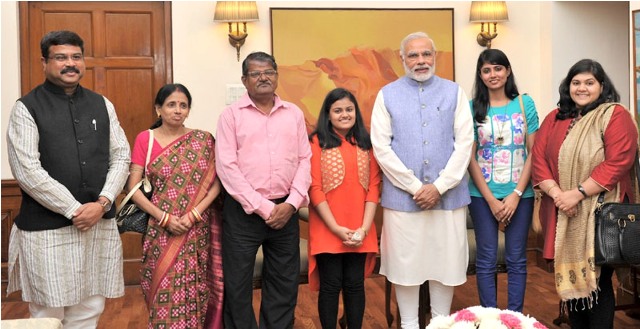 On cloud nine after the meeting, she said that the reality is yet to seep in.

“I can’t believe I met Narendra Modi ji. I am in awe with him and his hospitality. Inspite of his busy schedule, he spent 20-30 minutes with me. He personally spoke to my mother, father and sister. I can’t even express how happy I am,” – Ananya

Ananya, whose mother is a housewife and father works as a director in a government industrial department, emerged as the winner of the Sony Entertainment Television show earlier this month.

Ananya, who won the music reality show with her dedication towards her passion, is seen wearing a bright kurti and Modi in an white kurta pajama teamed up with light blue Nehru jacket.

Ananya added that she was “thankful to (union minister) Dharmendra Pradhan, who facilitated the meet for me”.