Here we have a new star kid who was away from the limelight to enter in Bollywood. Vardhan Puri who belongs to Puri Khandar is making an entry in Bollywood with the film Pagal. 29 years old, grandson of Amrish Puri one of the greatest actors of Bollywood.

He is all set to play the lead in Jayantilal Gada’s untitled romantic-thriller which will begin shooting in September in Delhi and Shimla. Vardha born in actor grandfather Amrish Puri’s family. He started training since the age of five under the guidance of his grandfather’s mentor National Award-winning actor filmmaker-writer Satyadev Dubey. 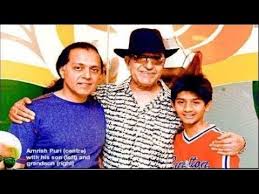 He has also assisted directors like Habib Faisal and Manish Sharma on films Ishaqzaade, Daawat-e-Ishq, and Shuddh Desi Romance. On his legendary grandfather, Vardhan told Mumbai Mirror, “Dadu is the God whom I pray to. I was so close to him that I would sleep between him and my grandmother. When he passed away, I decided that if I do something, it would be for him. This film is an ode to him.”

'No One Flirts With Me', confessed Disha Patani

KBC 11: Contestant Asks, What Jaya Bachchan Does To Make Him Look Young - Here's His Reply