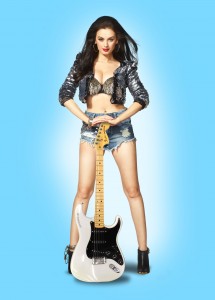 “I believe that all actors should work hard to look convincing. My role in ‘Kuch Kuch Locha Hai’ gave me a lot of scope for performance and my director Devang (Dholakia) allowed me to experiment.

“My look has been carefully designed also keeping in mind the current fashion that young rockers sport,” Evelyn, who has appeared in films like “Yaariyan” and “Yeh Jawaani Hai Deewani”, said in a statement.

Dholakia said that it’s always fun “working with actors who are hard working and have a fresh perspective”.

“Evelyn is like a gust of fresh air in my film and I’m really happy with how her character has shaped up. People are going to be in for a surprise when they see her in ‘Kuch Kuch Locha Hai’,” he added.

The film, which also stars Sunny Leone, Ram Kapoor and debutant Navdeep Chhabra in pivotal roles, is slated to release on May 8.