Indian cricketer KL Rahul posted a happy picture with his rumoured girlfriend Athiya Shetty on Instagram and treated their fans. On Saturday morning, Rahul posted a  picture on his social media account with Rumor’s girlfriend at the funky phone booth. The caption on the picture was so hilarious that it made Athiya’s father and actor Suniel Shetty to comment on the post.

Indian batsman was seen holding the receiver while Athiya kept standing by his side with that million-dollar smile on her face. The duo look very happy together in the picture. The caption reminded Suniel Shetty of his famous dialogue from hit film Hera Pheri.

It read, “Hello, Devi Prasad….?”. Daddy Shetty replied with an amused reply on the post, laughing emojis in the comments.

Even KL Rahul’s good friend Hardik Pandya commented on this picture and  Shikhar Dhawan too. 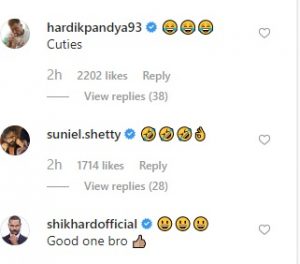 Athiya and KL Rahul are rumored to be dating each for a long time now. The duo was spotted together hanging out over dinners and lunches. Recently, the cricketer and the actor were spotted as they used the same car while leaving from the friend’s place. In fact, KL held Athiya’s handbag inside the car as she sat comfortably alongside him in the back seat.