The Student Of The Year star Alia Bhatt turned 25 yesterday and she is in Bulgaria shooting for Ayan Mukerji’s upcoming movie ‘Brahmastra’. The whole team is in Bulgaria and we can see the pictures from the sets and Alia is cutting the cake with the team. 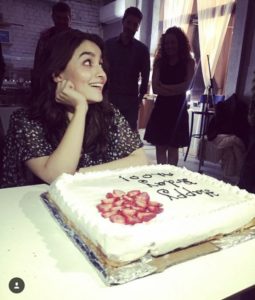 This bash is thrown by Ayan Mukherjee along with the team. Among the team, we also saw Ranbir Kapoor’s mom Neetu Kapoor who is also there with her son but Ranbir is not seen in the frame. Neetu also posted a picture of Alia and wished her saying, “Birthday girl in her own world 🌺#brahmastra🔥@aliaabhatt #ranbirkapoor”. 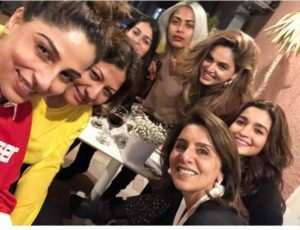 One of the young actresses of Bollywood, Alia has achieved a lot at a very young age and on her special day, messages poured in on social media from her fans as well as Bollywood celebrities.

We also saw a cake cutting video of Alia where she is looking so cheerful and cute. Karan Johar also planned to join the team in Bulgaria but he had to drop the plan due to his mother Hiroo Yash’s 75th birthday.

Talking about ‘Brahmastra’, the movie also stars Amitabh Bachchan, Ranbir Kapoor, and Mouni Roy. Alia has lots of movies in her kitty. She will be seen in ‘Raazi’ and ‘Gully Boy’.