Nick Jonas and Priyanka Chopra are the most romantic couple in town. The lovebirds share many photos on social media and update fans everything. Despite their hectic schedules, the two always find a way to be with each other. Priyanka is in her city Mumbai and promoting her upcoming film The Sky Is Pink in India. Nick has found a way to be with her, but there’s a twist.

Priyanka is going to appear in the dance reality show Dance Deewane to promote the film. She performed the dance with Madhuri to Dola Re,  the anchor Arjun Bijlani gone crazy after seeing their dance performance. Later, Arjun made Nick mouthing Punjabi dialogues appeared on the screen.

“Nick” talks in fluent Punjabi, “If you hit on my Priyanka, I’ll hit you in your teeth.” 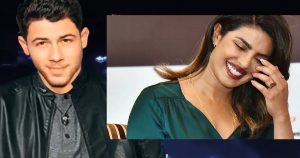 Priyanka also visited Kareena Kapoor Khan show Dance India Dance, and the two had a “face-off.” Priyanka shared a video and wrote, “Our kind of face-off… Thank you #DanceIndiaDance for having us…”

The film is going to release on 11 October!

Bigg Boss 12 Contestant From Dipika Kakar To Jasleen Mathura, Here What They Are Upto...